Authorities are trying to determine whether a subcontractor is responsible for an explosion that killed a Wisconsin firefighter. 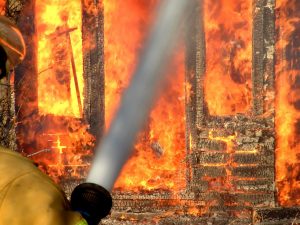 Last week’s blast closed a large part of downtown Sun Prairie, according to U.S. News & World Reports. The incident, which is being blamed on a gas leak, leveled a downtown bar, caused a massive fire at a pizzeria, killed a firefighter and injured more than a dozen other victims.

Authorities think a work crew punctured a natural gas main. Sun Prairie Fire Capt. Cory Barr was killed. Verizon Wireless said it had contracted with a Lawrence, Kansas communications company for a fiber optics project but gave no other details. A representative of the Kansas company said employees were working in the vicinity of the explosion but were evacuated before the blast. He declined further comment.

Another telecommunications company reported working on fiber optic projects in the area but denied puncturing the line. A spokesperson for the gas-line owner also declined comment. Sun Prairie is a Madison suburb of about 30,000 people.  Firefighters and emergency responders had been in the process of evacuating people from the area when the explosion occurred.

Our Wisconsin injury lawyers often encounter such uncertainty and secrecy in the wake of serious and fatal work accidents. All parties understand they could face liability claims from injury victims.

This case also illustrates the impact of third-party liability on many serious and fatal work accidents. While Wisconsin workers’ compensation claims may assist injured workers, in exchange those workers are typically prohibited from suing their employer for additional compensation.

However, when a third party — such as a subcontractor — can be identified as responsible, injured employees from other companies may have a separate negligence claim against such entities. Injured bystanders may also make a negligence claim via a traditional personal injury lawsuit. Identifying all of the responsible parties will best ensure an adequate financial recovery.

The National Fallen Firefighters Foundation reports Wisconsin workers’ compensation law provides death benefits to firefighters and their families. Benefits are awarded by quadrupling a firefighter’s average annual salary. The final benefit is 75 percent of that amount, but not less than $50,000 (Wis. Statute 102.475). Surviving family is also entitled to continuing healthcare benefits, retirement and pension benefits and up to $6,000 in funeral expenses.